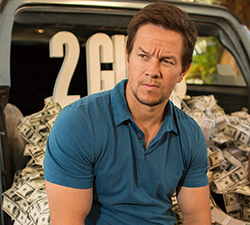 The numbers agree: Star Wars may have topped another weekend, but history will name Daddy’s Home as the real winner this holiday season!

Daddy’s Home grossed $38.8 million, good enough for second at the box office. While it made $115 million less than The Force Awakens, Daddy’s Home further proved that Mark Wahlberg is both hilarious and cool. Can John Boyega say that? Probably not (we haven’t seen Star Wars yet, but feel safe in assuming this).

Joy came in third place with $17.5 million. Don’t fret, DeNiro fans: the actor’s next film, Dirty Grandpa, could be the one to finally unseat Star Wars in January.

Of course, Daddy’s Home has a good chance of doing that as well. We’re anticipating something akin to Titanic where the film hovers at the top of the box office rankings for months and months.

We’ll be watching and reporting as more develops. Check back next week!